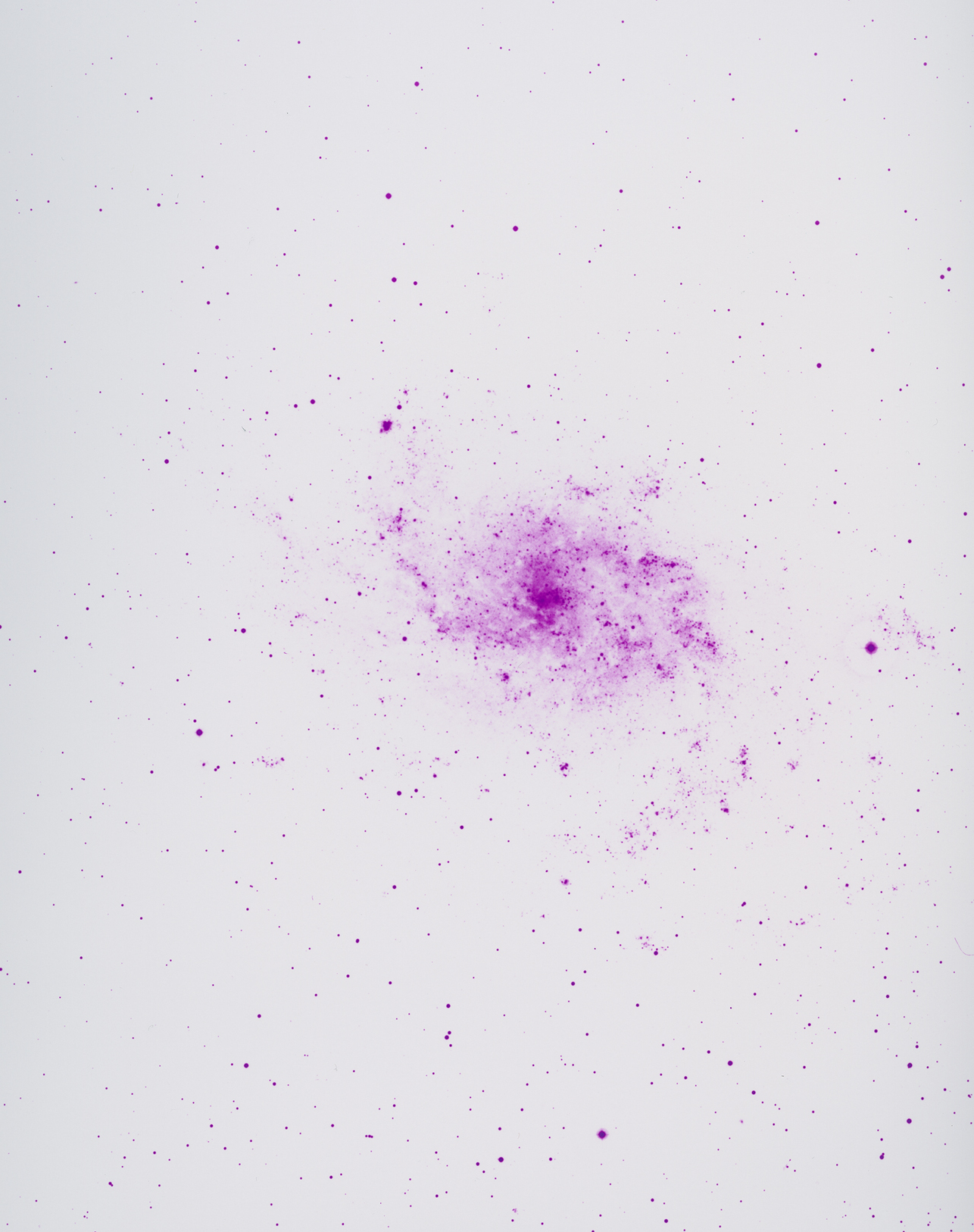 The Intervalle gallery is exhibiting for the first time the work of Caroline Corbasson who proposes with "Basses Lumières" a project realized in collaboration with Andréa Montano.

Caroline Carbosson (1989, Fra) Caroline Carbosson (1989, Fra) is the granddaughter of one of the founding members of the Angénieux company, created in 1935 and renowned for nearly a century for the manufacture of photographic and cinematographic lenses. A graduate of Saint Martin School, London and ENSBA Paris, Caroline Corbasson belongs to the young generation of artists who marry physical reality and human cultures. She describes the current world, its societies, its cultures, from the materials that compose it, and not from purely social or even human data. Without claiming the posture of a scientist, the artist explores the way in which the observation of space and the improvement of astronomical tools have caused a rupture between the immediate perception, that of the average individual, and that of scientists. His drawings, photographs, sculptures and videos scrutinize this expanse, relating the infinitely large, whose evolution dates back to an ante-cultural period, to the depth of the infinitely small, perceptible through the tools of science.

"Basses Lumières" proposes to experience the vertiginous time thanks to the light, even tiny, that we perceive from the universe. The journey from the surface of the stars to our retina is very long. The light of the sun takes 8 minutes to reach us. The sun that we see is therefore the sun of 8 minutes ago. When we look up at the sky, we see the stars as they were 10, 50, 1000 and more years ago. The starlight plunges us into a very distant past that often exceeds our birth, that of humanity or the appearance of the earth, which invites humility and delight. Caroline Corbasson and Andréa Montano celebrate this time distortion and the stardust that we are through the infinitely large in the Heat series and the infinitely small with the charcoal prints of Tracks.

In 2020, the Laboratoire d'Astrophysique de Marseille bequeathed to Caroline Corbasson, then artist in residence, a photographic archive composed of 42 glass plates and 71 silver negatives. These documents testify to observations made between 1962 and 1978, whose negatives, now obsolete, had been forgotten for several decades. Touched by the beauty of this collection, Caroline Corbasson decided, in collaboration with Andrea Montano, a photographer with whom she regularly collaborates, to build a large-scale artistic project paying tribute to it. They wish, through a play of colors evocative of the extreme temperatures of space, to revive these images of the distant sky by exploiting them in new forms, detached from any scientific requirement. In 2020, they conceived a first series of color photographic prints exhibited at the occasion of his solo exhibition Pollen at the Laurence Bernard Gallery in Geneva in September 2020. The project has developed until today, where more than fifty unique color prints have been made, most of which are exhibited here at the Intervalle gallery.

Caroline Corbasson and Andréa Montano join forces to deliver a work that unites two sciences that are a priori distant: astrophysics and botany. These two fields of research inspire them to create a photographic series entitled "Tracks" (rails, paths, traces). The charcoal prints reveal a distant filiation between the vegetable and mineral kingdoms. Under a black light, the petals of a flower are adorned with phosphorescent spots resulting from the phenomenon of pollination, but which under the artists' lens become the seminal traces of the stars on their terrestrial progeny.

Texts written by the artists on the Heat series:

Andrea Montano
"This project was born from an encounter with negatives. Caroline received a box of black and white films, from an outdated technology. I remember opening a box of negatives where dust and stars were superimposed and merged. The infinitely large and the infinitely small, Caroline's themes, jumped out at me. I wanted to see all this in a big way, to make them exist for real. To have stars in my hands, in paper and in color.

Caroline Corbasson
"The Heat series, realized with four hands, allowed us to pay homage to a photographic archive that had been bequeathed to us by the Astrophysics Laboratory of Marseille a few years ago during a residency. A hundred negatives in black and white, of the sky. Galaxies, nebulae, stars, images that are now abandoned, obsolete, because they are largely "outdated" in terms of precision. These negatives, which had been dormant for many years, have been reunited with light, their raw material. Freed from their scientific requirement, they give to see an evocative, poetic sky: so many windows on a universe which in spite of the technological advances, remains unfathomable.

Andrea Montano
Usually, I shoot my negatives, my photos; faces and landscapes. Here, for the first time, it is about foreign negatives. I have no sense of loyalty to the moment of the shooting. Moreover, these are not images of the earth, of a reality that I understand. I am in space, freed from a realistic field shooting frame. These negatives allowed me to do in depth what I had always sensed and experienced in the lab; perfect, vibrant, organic color flats that the chromogenic print offers; I was free and excited to make prints according to the colors we like, without any limits. Choosing the color of the sky and the stars."

Caroline Corbasson:
Diving into the pitch black. You have to memorize the gestures, count the exposure times, know the location of each button on the enlarger. There is something mystical about handling distant sky negatives in the opaque darkness of the lab. After exposing the photosensitive paper, there is the waiting, the impatience to see: then the sacred moment of revelation. An image appears, chemical, tangible. I have often felt connected to the astronomers who, in the darkness of their domes, produced the negatives that we used. The long hours spent with Andrea in that laboratory saw a succession of different emotions; excitement, disappointment, doubt, curiosity, confidence... Trusting our intuitions, groping in the dark, failing, starting over. I must admit that some failures or technical accidents have been of great interest to me: prints that have leaked light, like a burn, or prints that have been exposed for too long, in a deep black. The laboratory is a space full of promise, of moments of grace.